Aubrey Beardsley's (1872 - 1898) career was short and brilliant. He became notorious for his illustrations in two "decadent" periodicals of the period, The Yellow Book and The Savoy.

In 1892 Aubrey Beardsley was introduced to the publisher J. M. Dent, who commissioned the young artist to produce illustrations and decorations for an edition of Thomas Malory's novel Le morte d'Arthur. Beardsley worked on the project during 1893 and 1894.

"The image of decadence Aubrey Beardsley (1872-98) was the most original genius of British art in the 1890s. His talent for drawing enabled him to escape a hated job as a clerk in an insurance company, and in his short career, before his early death from consumption, he became internationally famous for his illustrations which pushed against the limits of fin-de-siècle decadence. He drew in pen and ink, and his designs were produced as line-blocks, using the newly available process of photomechanical reproduction. Beardsley's style is an entirely original blend of English Pre-Raphaelitism (especially Burne-Jones' style), French Rococo engravings and Japonisme. This [Self-Portrait, above] is an early drawing and was reproduced for the first time in an album of designs published in 1899, the year after his death in France. It was presented to The British Museum by Robert Ross, a close friend of both Oscar Wilde and Aubrey Beardsley, of whom he wrote one of the first biographies."
- The British Museum

"The years 1893-94 were perhaps the most important in Beardsley's career. He was hard at work producing illustrations and covers for books and periodicals, including his first commission, J. M. Dent's edition of Malory's Morte d'Arthur (Beardsley had been introduced to the publisher in the summer of 1892). This massive work, issued first in 12 parts and later in volume form, contained over 300 different illustrations, chapter headings, and vignettes. Also in 1893 the artist formed an alliance with the person who was to catapult him to fame and prove his downfall - Oscar Wilde."
- Life of Aubrey Beardsley

See also his article in Wikipedia.

Cover of The Yellow Book, volume 1

The Peacock Shirt, illustration from Salomé by Oscar Wilde which was banned. 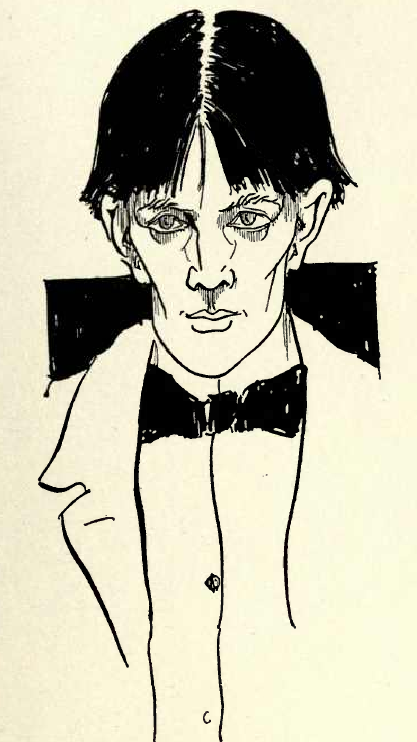