History of Graphic Design through Publications: CAXTON AND THE POLYCHRONICON

Printing was an important technological change of the Renaissance. The influence on society was dramatic. It is estimated that there were somewhere between 8 and 20 million items printed--about 40,000 different titles. These amounts were so fantastic that some people saw printing as an invention of the devil.

In addition to books, a considerable amount of ephemeral literature, such as broadsides, cheap romances, ballads, and devotional tracts, were also printed during this period, but they have almost all been lost or exist only in fragments of waste lining bindings and in other hidden places.

All books printed before 1501 are called incunabula.

Incunabula (Latin: cradle or infancy) - Refers to the first fifty years of printing with moveable type, printing completed before 1501, a time when some books were still being hand-copied.

The age of the Incunabula has some similarities to us in terms of technological change. During the past 20 years, the World Wide Web has changed our culture in ways equally as dramatic as those changes caused by the printing press. 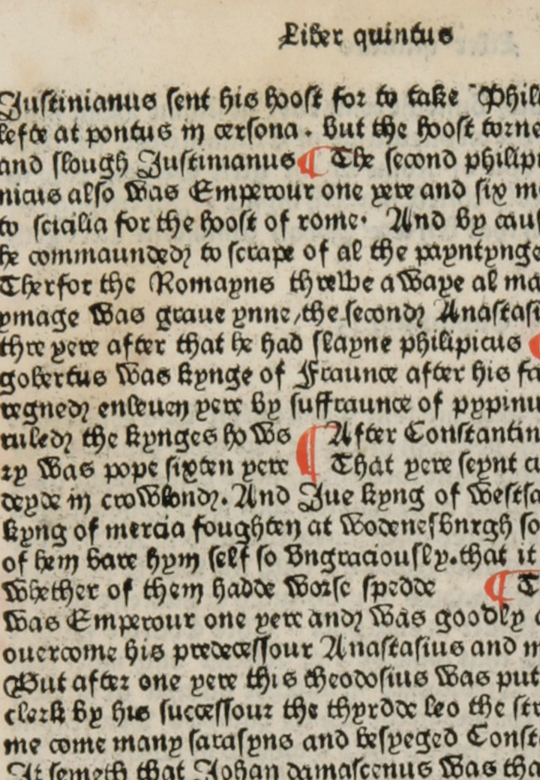 This is a detail of an original leaf from the Polychronicon printed by William Caxton at Westminster in the year 1482!

The particular book was beautifully designed and letterpress printed in 1938 by the Grabhorn Press for The Book Club of California and contains a specimen, one actual original page from the Polychronicon.

The Polychronicon (Universal History) was printed by William Caxton in 1482 and circulated widely. It was written by Benedictine monks and is actually more legend than fact. But it was Caxton's most ambitious printing project and the longest book in terms of page count. 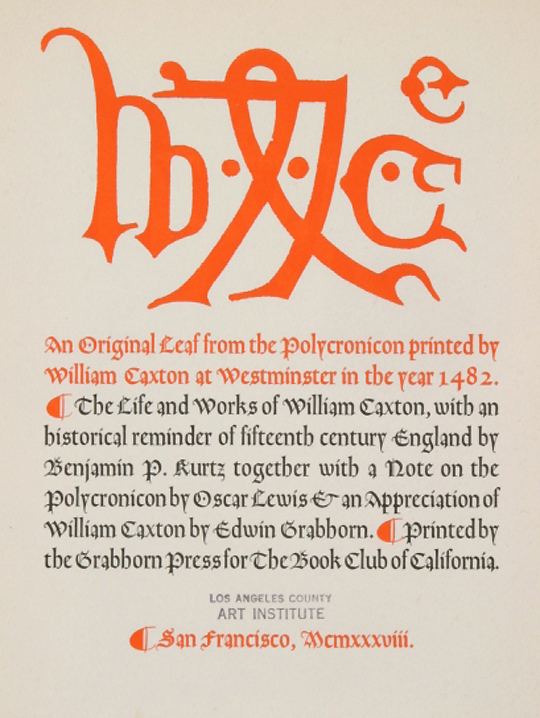