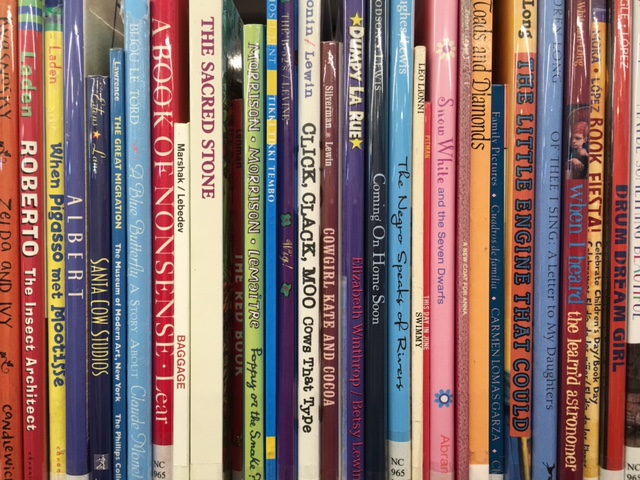 We have over 7 shelves of illustrated children's books. They are mostly located in the NC 965.

Books about children's literature are mostly located in PR 990 and PN 1009.5. There are MANY e-books as well.

There are also books ABOUT illustrating for children, illustrators, history and criticism, and interpretations of children's literature from various perspectives.

You can always add a name of a county to terms above.

There are also many collections of fairy tales, folktales, and fables.

These books are available at public libraries everywhere.

Caldecott: Awarded by the American Library Association, to the artist of the most distinguished American picture book for children. Otis College has most of these.

Newbery: The Newbery Medal honors the author of the most distinguished contribution to American literature for children.

Alex Award: Given to ten books written for adults that have special appeal to young adults, ages 12 through 18.

Americas Book Award for Children's and Young Adult Literature: Books that authentically presents the experience of individuals in Latin America or the Caribbean, or of Latinos in the U.S.

Bookslist Editor's Choice Books for Youth: Outstanding books that mixes popular appeal with literary excellence, the Books for Youth editorial staff has chosen the titles below as best-of-the-year fiction, nonfiction, and picture books.

Carnegie Medal: It is awarded annually to the writer of an outstanding book for children.

Coretta Scott King Award: Award to excellence in literature by African-American author that promotes the cultural understanding of all people.

International Reading Association Award for Children and YA Lit: Children’s and Young Adult’s Book Awards are given for an author’s first or second published book written for children or young adults (ages birth to 17 years). Awards are given for fiction and nonfiction in each of three categories: primary, intermediate, and young adult. Books from any country any language are considered.

Jane Addams Book Award: Books that promote the causes of peace, social justice, world community and the equality of the sexes and all races.

Kate Greenaway Medal: Award given to a distinguished illustration in a book for children from UK.

Laura Ingalls Wilder Medal: Award honors an author or illustrator whose books, published in the United States, have made, over a period years, a substantial and lasting contribution to literature for children.

NCTE Award for Excellence in Poetry for Children: Established in 1977 to honor a living American poet for his or her aggregate work for children ages 3–13.

NCTE Orbis Pictus Award for Outstanding Nonfiction for Children: Established as an annual award for promoting and recognizing excellence in the writing of nonfiction for children.

The New York Times Best Illustrated Children's Book: Since 1952, the Book Review has asked a panel of judges to make a selection from among the several thousand children's books published that year.

Outstanding Science Trade Books for Students K–12: Titles selected by book review panel of NSTA in cooperation with the Children's Book Council focus primarily on books targeted at grades K through 8 although in 2002 the list began to also include high school level titles as well.

Pura Belpré Award: This award is presented to a Latino/Latina writer and illustrator whose work best portrays, affirms, and celebrates the Latino cultural experience in an outstanding work of literature for children and youth.

Robert F. Sibert Informational Book Award: Awarded annually to the author (including co-authors or author-illustrators) of the most distinguished informational book published in English during the preceding year.

Scott O'Dell Award for Historical Fiction: Award goes to a meritorious book published in the previous year with a focus on historical fiction.

Theodore Seuss (Geisel Award): The Geisel Award is given annually to the author(s) and illustrator(s) of the most distinguished American book for beginning readers published in English in the United States during the preceding year.

Erza Jack Keats Award: The Ezra Jack Keats New Writer and New Illustrator Awards are given annually to an outstanding new writer of picture books for children (age 9 and under) and are presented jointly by the New York Public Library and the Ezra Jack Keats Foundation.

Children's Books Get Banned More Than You Think!

Banned Books Week is an annual awareness campaign promoted by the American Library Association and Amnesty International, that celebrates the freedom to read, draws attention to banned and challenged books, and highlights persecuted individuals.

The Library of Congress created an exhibit, "Books that Shaped America," that explores books that "have had a profound effect on American life."

Article: 30 Banned And Challenged Kids Books That Will Make You Feel Terrible About Humanity